By Cashel on December 5, 2016 in Explore, Tourism and History

Athassel Abbey is located near the village of Golden, 4 miles outside the town of Cashel. This is the largest medieval priory in Ireland, and was founded for the Canons Regular of St Augustine by William FitzAdelm de Burgo at the close of the 12th century and dedicated to St Edmund. The abbot was a Peer of Parliament. The priory was dissolved in the time of Edward V1, and in the reign of Philip and Mary was granted to Thomas, Earl of Ormond.The remains of the monastery cover four acres.

The church is 210 feet long and has two transepts, with a square tower in the centre of the crossing and another smaller one at the north-western end of the church. The nave had two aisles which were probably vaulted, and was probably not built till about 1280. The choir was built about 50 years earlier, though its east windows were replaced in the 15th century. The tower at the crossing ( more Cistercian than Augustinian in style ) seems to have been planned from the beginning; there is a very fine doorway in the west wall; above it is a recess ( blocked up in the 15th century ) which may have contained the Rood or cross. The tower was rebuilt probably after the church had been devastated and burned in 1447, and after this date the nave was probably left roofless. In the south wall of the chancel there was a late 13th century tomb with the figures of Norman knights on it now removed for display on the Rock of Cashel. To the south of the church lay the cloister , of which little remains, but a number of 13th century buildings surrounding it remain.

To the south of the transept lay the sacristy, and beyond a covered passage lay the chapter house and other vaulted rooms. The refectory was situated on the first floor of the south wing, and leading to it is a fine doorway. The monastery was surrounded by a high wall, and beyond the gatehouse is a bridge connecting the monastery with the surrounding area. Outside the walls of the monastery there was once a thriving town which was burned in 1319 by Lord Maurice Fitzthomas and again in 1329 by Bryan O Brien- and nothing now remains of it.

If you are interested in nature, woodland, wildlife or just walking, then Glengarra Wood is an ideal place to visit during your stay at The Apple Farm. It is situated 13km west of Cahir town, beside the N8, the main Dublin to Cork road, and extends upwards on the southern slopes of the Galtee mountains. Parts of the woodland have been developed to cater for visitors.

The facilities provided include car parking, 5km of pathways, log bridges, picnic tables, and information boards providing the names of the different tree species, etc. There are many fine specimen trees, including the giant California Redwood, which were planted during the time when the area was part of the Lismore estate. In the early summer, the rhododendron flowers make a fine display.

The Burncourt river flows down through the wood, although in this area it would be better described as a mountain stream which has revealed the underlying red sandstone. About 2.5km from the main road is an old hunting lodge which is now used as hostel accommodation.

The name ‘Aherlow’ is derived from the Irish, ‘eathralach’ meaning between two highlands. The highlands referred to are the Slievenamuck where the car park is situated with excellent views of the Galtee Mountains across the valley. Slievenamuck is said to be named after a great pig slain there by Fionn MacCumhail. The area is also said to have been completely covered in oak woods through which roamed herds of wild pigs. These woods were cut down in the 17th century for use in tanning and shipbuilding.

550 metres further eastwards of this viewing point there is another rock cliff (it is 40 metres in off the track) on your left. It is called LEAC-A-THORABH(flagstone of the bull). 750 metres from here is the forest road referred to above. Continue straight onwards (eastwards) along the forest road for 200 metres until you reach another junction of forest roads.

Follow this track for about 30 metres to its bend and from the bend head north-eastwards inside in the gully in the forest for 750 metres until you reach the tar road. This 750-metre walk is along the old Coach Road and along the way you cross over a forest road and then over and interesting stone bridge.
Cross over to the other side of the tar road and follow the Coach Road again through the forest. This takes you back to the Upper Car Park where you started off from.

Family Walk
3.3 kilometres (2 miles). Climb 130 metres (400 feet). Walking time 75 minutes From the Upper Car Park walk southwards downhill along the tar road for 1.1 kilometres until you reach CHRIST THE KING STATUE near the Lower Car Park. You then follow the route from here back to the Upper Car Park via the Old Coach Road as described above in the Classic Walk. 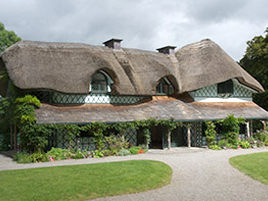 This is a superb example of an early 19th century “cottage orne”. It is picturesquely situated on an elevated site with access by stone steps.
The Cottage consists of 3 floors. The basement contains the old kitchen and wine cellar and is hidden completely underground. The entrance to these rooms is through an underground passageway, so that servants could be availed of, but not seen.The Cottage was restored between 1985 and 1989 and is well worth a visit, in order to fully appreciate its history, enchanting beauty and situation. Extensive woodland and riverside walks abound.

Holy Cross Abbey is situated between the towns of Cashel and Thurles. It was founded in 1169 by the King of Thomond of the Cistercian monks. A relic of the true cross owned by the King was given to the Abbey.

It was very prosperous and several of the Abbots were peers of Parliament. The Abbey was suppressed in and given to the Earl of Desmond. The monks however, stayed until the 17th century. In the grounds of the Abbey are a complete set of Stations of the Cross, donated by Senator and Mrs. Hanafin, of Thurles. The Stations of the Cross were erected in honour of Padre Pio. Mass is said in the Abbey and is a popular place for weddings.

Directions
From Cashel, follow the R660
Approximately 15 minutes from Cashel

Michelstown Caves were discovered in 1833 when a farm labourer called Michael Condon was quarrying limestone and dropped his crowbar into a cavern.
On the 13th September 1875 Timothy Mulcahy became the owner of the farm on which the cave is situated. Mr Mulcahy took a keen interest in the preservation of the cave. Fortunately the cave has remained in the family ever since. Major work was started in the cave in 1969. Electricity was installed in 1972 making it the first cave in Ireland to have an electric lighting system. The result is a wonderland of muted colour. The cave is now open daily throughout the year and the temperature remains constantly at 54 fahrenheit.

Mitchelstown Caves are located in county Tipperary 12 kilometres east of Mitchelstown. The tours are approximately 2 kilometres in length going through several caverns with examples of different types of formations many of which are given colourful names.The limestone being dissolved by rainwater percolating through the soil and stone is redeposited in the cave as the drops of water evaporate in the air forming stalactites, stalagmites, calcite columns, and flow stones among other examples of formations which are to be seen in the caves. Considering that it takes over a thousand years for a stalagmite or stalactite to grow a few centimetres the formations found in Mitchelstown Caves are highly impressive. Examples of 350 million year old fossils are to be seen as well as some cave fauna. 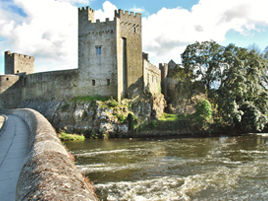 Cahir Castle is one of the largest and best preserved castles in Ireland. It was one if Ireland’s best known tourist attractions. Cahir Castle was built originally in the 13th century on a site of an earlier native fortification called a cathair (stone fort), which gave its name to the place. The castle was granted to the powerful Butler family in late 14th century.

The castle was enlarged and remodelled between the 15th & 17th century. It fell in ruin in the late 18th century and partially restored in the 1840’s. It is presently managed by Duchas.

Our mission is to promote and publicize the many wonders that exist in Cashel beyond the iconic Rock of Cashel. This website is part of our efforts to ensure that people get to learn about the history and many attractions of this wonderful world famous location.Our purpose is to develop the historic town and ensure that people come to Cashel and have a pleasant, entertaining, informative well priced and memorable visit that they would be happy to recommend to friends.If you have any questions don’t hesitate to contact the Cashel Heritage Centre and Tourist Information Office at [email protected]
View all posts by Cashel →

We'll send you all the happenings from Cashel town including special deals!

We'll send you all the happenings from Cashel town including special deals!

Our mission is to promote and publicize the many wonders that exist in Cashel beyond the iconic Rock of Cashel. This website is part of our efforts to ensure that people get to learn about the history and many attractions of this wonderful world famous location.

Our purpose is to develop the historic town and ensure that people come to Cashel and have a pleasant, entertaining, informative well priced and memorable visit that they would be happy to recommend to friends.